The horoscope of artist Nolan Oswald Dennis, who lives in Johannesburg, promised that exciting ideas would be shared on October 9, 2019—the day he held a video chat with Boca Raton–based astrologer Monisha Holmes. They planned to discuss his ongoing project “Black Liberation Zodiac” (2017–), which has been shown in places like the Museu d’Art Contemporani de Barcelona and Goodman Gallery in Cape Town. The installations in Dennis’s series typically involve wallpaper that doubles as a diagram featuring symbols from the black liberation movement’s worldwide visual language. He mounts other elements—prisms, drawings, shells, videos—onto a wall or positions them within the exhibition. During their session, Holmes—who also goes by the name Six—offered Dennis a reading of the stars and his artwork alike.

Nolan Oswald Dennis That title calls up many things, and the Black Liberation Army is essential. But there’s also a whole black liberation world—a global language and symbol system. I’m from South Africa, but I find that this black liberation rhetoric feels familiar everywhere I go: North America, Brazil, the UK. There’s a shared history, with many shared references. In “Black Liberation Zodiac,” you’ll see drawings of a gun, a book, a dove, a fist, a lion, a panther. And this iconography is appropriated all the time because it’s a useful language: the black liberation language is a language for liberation, period.

The Greek zodiac system is another symbolic language that’s shared across the globe. I’m interested in how these two systems relate to the decolonial imperative that [Duke University semiotician and cultural theorist] Walter Mignolo terms “option theory”—which involves acknowledging that many different worlds exist, and valuing “other” ways of knowing.

Holmes I really appreciate how your use of black liberation symbols makes clear that black culture isn’t monolithic, but is itself filled with cultures, plural. And that you’re using those symbols and others to represent the star signs. In String Sequence (Black Liberation Zodiac) [2018] you show symbols for Leo, Libra, Gemini, etc. But you have doves—not crabs—representing Cancer, or a bull representing what seems to be Virgo. We usually associate a bull with Taurus!

I am currently looking into how civil rights movements have coincided with movements of stars and planets. I went to a workshop about planetoid Sedna, which is a slow-moving dwarf planet: people look to it to chart evolutionary changes. It was in Taurus during the peace and love movement of the 1960s, which makes sense, because Taurus is ruled by Venus. When Sedna moves into Gemini in 2023, we can expect even more advancements in technology and communication. 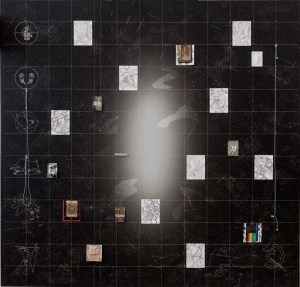 I find people often lose sight of astrology’s role as an observational tool, a calendar system. It isn’t inherently spiritual: it came from people making observations about their experiences.

Dennis Thinking about astrology as functional is, for me, an important way to think about the spiritual. The stars are natural navigational tools.

Spirituality lies in these symbolic systems, which are more or less functional systems. That doesn’t mean they always cohere rationally. I collect imagery and connect it all back to certain moments in the black liberation struggle. A lot of the images are directly related to specific movements, specific times: like the black panther. Sometimes I map them astrologically, or place them more intuitively, in choice spots on the charts I’m creating. My diagrams are based on the International Astronomical Union constellation charts, as well as the South African Astronomical Observatory’s southern planisphere of star patterns. Once I start mapping, new configurations emerge, allowing me to interpret the symbols anew.

Holmes Your work is so beautiful and intricate, but it also touches on the darker parts of black history. Especially in Ecliptic (Black Liberation Zodiac) [2017], where we see a gun. I imagine a gun is a controversial symbol in black cultures all around—it definitely is in the United States. 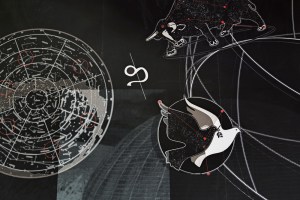 Dennis A lot of the iconography that I’ve inherited carries myriad complications. A symbol always means at least two things, often more. I’ve been looking into different histories of the black fist as a symbol of struggle. One of the earliest uses of the symbol is actually the black fist in chains. The symbols I use morph across time and cultures.

The gun is a great example of this: it figures both as a tool of oppression and as a vehicle of liberation for people like the Black Panthers. Like many symbols in the black liberation language, the gun seems dangerous, ugly, and painful, but it can also be seen to promise some hope.

Holmes I see that tension where the gun is accompanied by a hoe, as well as a book. You’re drawing those objects to symbolize Pisces, which is a water symbol. I don’t think those are the symbols people would think of when they picture Pisces. These practical, material objects would more typically be associated with earth energies. This conjunction forced me to stop and think through all the nuances in these loaded symbols like the gun, and consider how these symbols mean different things in different contexts. What is a book to a slave? What is a book to us? What is a gun to someone who’s in chains, or to a slave master? So in that sense, you are representing Pisces, because in addition to being a water energy, it’s the oldest zodiac energy: Pisces have old souls and are very thoughtful.

Dennis I didn’t know that Pisces was the oldest energy! I’m a Pisces! I really wanted to generate sympathetic readings like yours, which allows the meanings behind the symbols to continually expand.

Holmes That’s the most Pisces answer you can give! You’re all about expansion and shifting perspectives. How did you come to realize that astrology was the right tool to use in your art?

Dennis The sky is a space that more or less everybody has access to in some way. It’s also much more difficult to police than most other spaces. Even though it’s a space that cannot be owned in a traditional sense, there are still efforts toward a heroic sort of domination in wanting to map the stars and planets. 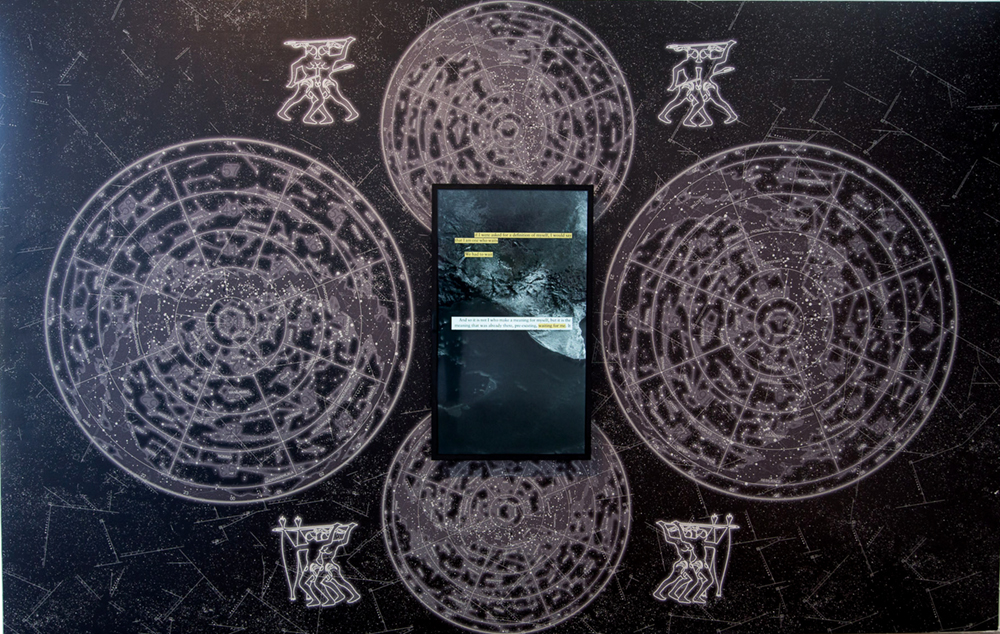 While this Western, scientific project wants to dominate the sky, it hasn’t been able to banish astrology. Astrology’s history intersects with the history of mapping—I learned that the astrological signs are mapped along the ecliptic, which cuts diagonally across the Southern and Northern Hemispheres, making it equally distributed to both halves. Most mapping is based around the equator, so the stars that you see in the Northern Hemisphere are not the same ones you see in the south, where I am.

Constellation names are drawn from Eurasia, in the Northern Hemisphere. When European people came to the Southern Hemisphere, they’d never seen our constellations before, so they started naming our stars like weird, sad copies of those in the north. They called the southern equivalent of the Pisces constellation just “southern fish.”

Holmes That’s like when eclipses are visible only in certain parts of the world. But I didn’t know about the off-brand naming!

Dennis That’s a good way to describe it.

Holmes I’m a Sagittarius, so I make a lot of jokes about sad things. Whenever I’m doing work involving black culture, I try to take a moment to ask “what were the ancestors thinking?” And arguably, Harriet Tubman might have been a sort of astrologer—or at least, she was looking to the sky to try to navigate, and find freedom. What do you want people to take away from your artwork?

Dennis The “Black Liberation Zodiac” is by design an incomplete system. I’m not very interested in giving people a specific message, but in exploring what happens when you try to read familiar symbols in a different context. I’m not telling them to learn a little bit of black history.

I’m working with the Greek zodiac, but there’s also the Chinese zodiac, which has a very different cycle. Then there are Zulu—my family is Zulu—modes of mapping the sky, and other Indigenous systems for cosmic meaning-making.

Holmes Tell me about your use of color, or lack thereof. The works in “Black Liberation Zodiac” are pretty much black and white, with some gray. There seems to be a dualism at play. Some people read black as powerful and/or evil, while white is perceived as pure or sterile.

Dennis My charts are meant to be an inversion of common infographics. Usually, a diagram is black ink on a white page, but “Black Liberation Zodiac” is white on black. I’m trying to work through what blackness signifies beyond race. In Western scientific thought, darkness and blackness tend to signify things that are outside the knowable or observable: dark energy, dark matter. 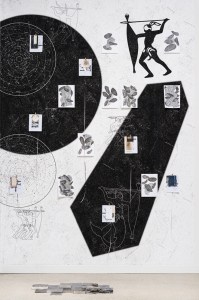 I also think about the work as part of an imagined black planetarium. A lot of decolonial discourse focuses on institutions that make meaning—especially the museum, though less frequently the planetarium. By inverting infographics, I highlight the planetarium’s display strategies. I love planetariums and their unique architecture—they usually have domes for observing the sky. I can relate to that ostensibly scientific structure through Indigenous architecture: like traditional Zulu grass domes, houses that are also based on the stars. They’re conventionally built on the northern slope of a hill, with the entrance to the house oriented so that you can always tell, every day when you wake up, what time of the year it is based on the position of the stars at sunrise viewed through the entry portal.

Holmes Knowing that, and revisiting Ecliptic, which has a black backdrop and a white calendar wheel, the black reads as a stand-in for how much we actually don’t know about the stars. And it’s a reminder that, when we tell any story, we should always acknowledge what we don’t know.

Dennis I want to keep that kind of modesty in the project, even though it has this ambitious name. But it’s ultimately orbiting around two questions: how do we know, and how can we know better, especially when it comes to liberation work?